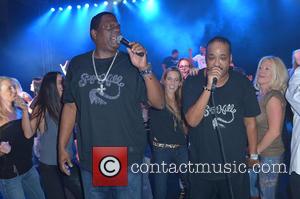 Legendary Sugarhill Gang rapper Big Bank Hank has lost his battle with cancer at the age of 57.

The hip-hop veteran died in his native New York in the early hours of Tuesday (11Nov14).

Born Henry Jackson, the star began his music career managing local rap group the Cold Crush Brothers in the mid-1970s, until his own talent was spotted by record executive Sylvia Robinson.

She paired him up with Michael 'Wonder Mike' Wright and Guy 'Master Gee' O'Brien to form The Sugarhill Gang, and signed them to her newly-established namesake label, Sugar Hill Records.

The trio became the first rap act to score a big hit with the 1979 classic Rapper's Delight, catapulting them to fame.

They went on score other hits with singles including Apache, Eighth Wonder and Showdown and released their last studio album in 1999, with Jump on It!.

His surviving bandmates Wonder Mike and Master Gee have since paid tribute to the rap icon, telling Tmz.com, "So sad to hear of our brother's passing. Rest in peace Big Bank."