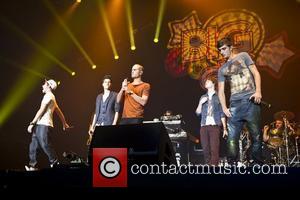 British pop stars The Wanted were forced to call in security before a recent concert after discovering a female fan hidden on their tour bus.
The All Time Low hitmakers staged a series of shows in the U.S. earlier this year (12) and the boyband was given a scare when a British woman appeared on their bus and refused to leave the vehicle.
Singer Max George tells Britain's The Sun, "We found her on the bus and she was begging us to let her stay. I said to her, 'Well, you can, but you need to think really carefully about travelling with a bunch of lads.'
"Then I started to see things weren't right. She started to scare the s**t out of me, to be honest. She was a big girl from Wigan (north-west England) and it became one of the most scary things I've seen from a fan.
"I had been sort of joking with her but then she wouldn't leave the bus. She just refused to go. Security ended up coming and literally pulled her out."