Jay McGuiness has shaved off an entire side of his head and Max George threw the cut locks into a packed audience with one lucky fan collecting the souvenir. 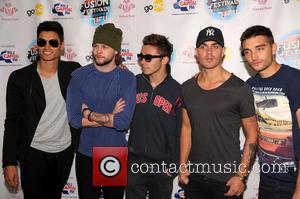 The Wanted band member Jay McGuiness has made the bizarre decision to shave off the entire side of his head.

McGuiness stood out from the band for his long, flowing locks but not anymore as he now only sports one side of whisky curls and debuted the new look at the SD2 Festival in Brighton, England on September 29th 2013.

Fellow band mate Max George, who is the proud owner of no hair, didn't want his friends curly locks go to waste and came up with the strange idea to give them to a fan.

Jay's hair was placed inside the stinky sock of Max (not a great combination) which was then thrown into the Brighton audience and the lucky fan who caught the hair-filled sock tweeted a photo of her concert relic to prove she has kept it.

The lucky fan tweeted the band's official account saying "I HAVE THE SOCK AND JAY'S HAIR".

The Wanted tweeted her back and said "Take good care of it".

That is a bit different from the usual merchandise fans purchase at concerts, but maybe it will be worth quite a lot of cash one day. The only thing left to do is put it on EBay.

The British boy band are preparing for their 3rd upcoming album called 'Word of Mouth' and is set to be released on November 4th 2013. They have reassured fans it is worth the wait and the five-piece have been more actively involved in the song writing process to feel a lot more confident about their material.

Siva Kaneswaran told the Daily Star earlier in September about writing their own songs, "we've moved on. We're more confident writers. I think every song is very personal and a bit more grown-up".

He added, "It's still classic Wanted, anthemic songs, but also there's some personal numbers in there".

The Wanted's new album will be like none of their previous work and shall be hotly anticipated by their loyal fans. As the band said it will be "worth the wait". Jay McGuiness doesn't have a full head of hair anymore