The Who - Quadrophenia, The Directors Cut Album Review

Review of Quadrophenia, The Directors Cut Album by The Who

Ever since Johnny Strabler (Marlon Brando) rode into town as the leader of The Black Rebel Motorcycle Club, a troubled James Dean dared to show outwardly open angered contempt towards his hopelessly inept parents or Bill Haley rocked around the clock to usher in a new dawn for music and teen culture there has always been a captive audience wanting, and in some cases needing, to see the portrayals of life as a disillusioned or dysfunctional adolescent. Capturing the angst and frustration felt by certain groups who yearn to be heard and understood not only gives them validation and a sense of identity but it also makes their seemingly intolerable isolation and misunderstood life make far more sense. The unifying quality of a well versed song or an actors ability to channel the mood and feeling of the youth of the time can not only be a very powerful thing it can also serve as a great way of preserving a piece of history through a medium that doesn't rely wholly on news reels, facts, speeches or statistics. 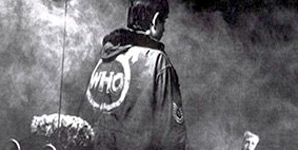 The sense of belonging and collective comradery, a feeling of being part of a movement and that somehow your life feels that much more enriched are all part of the teenagers rite of passage whether you're a Goth, Punk, Shoe-Gazer or Metal head. Each generation has its own particular set of musical genres in turn spawning a seemingly inevitable sub-culture that manifests itself in clothing, clubs, attitude, drug choice, language and even political bias. During the sixties the two predominant sects of the musical spectrum were most definitely defined as either Mods or Rockers. The former sharp suited, moped riders and the latter leather clad 'proper' bikers were easily identifiable not only by their dress and transport but by the bands which fell under their particular umbrella. The mood of the time was one slightly at odds with itself. Whilst prosperity increased and freedoms came more readily there was also a sense, for a portion of youth at any rate, that they deserved more and that what they were due couldn't come fast enough. At the time the 'teenager' was a relatively new phenomenon and as such they were plotting uncharted territory with their ever growing sense of identity, easing of parental authority and above all the monetary means with which to enjoy themselves. Quadrophenia captures the mood and spirit of this time brilliantly through the life of its main protagonist Jimmy Cooper.

Originally released as a double album back in 1973, Quadrophenia has been brought bang up to date, polished and extended with a double CD box set that also contains some of the early demos as well as unused songs. Now inextricably linked to the film which was born out of the album, Quadrophenia is a truly British piece of artistry. The second of The Who's rock opera's has some of the grandiose arrangements and orchestral backing of its forbear but at the same time still maintains a real earthiness and realism to its character. The songs are far more pithy and draw on the bond you develop with Jimmy's mentally unstable personality. It's more-or-less impossible to listen to the album without picturing Phil Daniels, Ray Winston, Toyah, Leslie Ash or Sting as the film uses all of the musical references to make real Jimmy's life. What is breathtaking however is just how good these songs are in isolation from the celluloid. The clarity and complexity of the tracks is stunning. The instrumentation from all involved is nothing short of fantastic with every note, every movement and every vocal intonation making for a magnificent aural delight. The title track alone is mesmeric in its entirety with Pete's guitar and Keith Moon's drumming being of particular brilliance.

Throughout the album, as the tale of despair and drug fuelled desperation progress, you get a real sense of Jimmy's growing frustration. Roger Daltrey seems to take on Jimmy's persona as his voice echoes the ups and downs he goes through. In fact the whole record has a cohesion that is easy to lose on such ambitious projects. Whether it is because a lot of the themes were drawn from near autobiographical references, or whether it is just because the band were at a creative peak, it means that the passion and purpose of each tune is equally well expressed. 'The Real Me', 'I'm One' (Recently given an a solo acoustic outing for 'Later'), '5.15' and 'Love Reign O'er Me' are such well crafted songs that it is easy to see why 'Quadrophenia has been described as The Who's last great album. Each song can stand alone on its own merit but when showcased as a body of work Quadrophenia is terrific. The finished product was clearly a work in progress when the demos were laid down. They seem far more bluesy than the final cut and it is interesting that one of the better demos, 'Anymore', never made it onto the album. With the added dimension of some of the demo's, as well as some of the original photography, and Pete's sleeve notes this newly packaged version is a fine collectors piece.

Quadrophenia is now, more than ever, a fantastic historical commentary on a volatile era in our musical past, but also a great album that can, and should be, appreciated for its own incredible musical quality.