The Who Roger Daltrey Gary Glitter 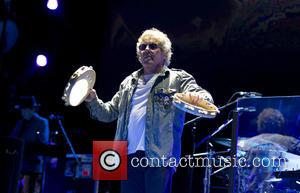 Picture: The Who and Roger Daltrey - The Who perform to a sold-out crowd at Ziggo Dome - Amsterdam, Netherlands - Friday 5th July 2013

The Who star Roger Daltrey is still suffering the ill effects of an eye injury he sustained while performing with Gary Glitter almost 15 years ago.

The veteran band was preparing a live rendition of its rock opera Quadrophenia in the late 1990s, and the stars enlisted a string of special guests, including Pink Floyd's David Gilmour and glam rocker Glitter.

During a rehearsal, Daltrey was struck in the face by a microphone stand being wielded by the Rock and Roll hitmaker, and he reveals he still regularly uses medical drops to keep the vision in his left eye steady.

He tells Britain's The Sunday Times Magazine, "My left eye's still giving me trouble. It was a hell of a blow. I was out for 20 minutes. How it didn't kill me I don't know. The next day I went on stage holding the eyeball in with a patch. The eye wanted to leave the face."