While the "Theme from S'Express" was sitting proud at number one in April 1988, The Wonder Stuff first graced the charts at number seventy-two with "Give Give Give Me More More More". But did we gather at the Cheese and Grain on Friday to pay homage to those chart-topping, early acid house masters, with barely a clutch of recognisable tunes, or were we in fact on the Stourbridge Express, stopping off at a series of belters from the Wonder Stuff's extensive thirty-year back catalogue? It's a bona fide crime that so many people under the age of forty scratch their arse, shrug and mumble, 'Didn't they do that Vic Reeves thing?' when you mention Miles Hunt and his indie-shindig ministers. Their set at the Cheese and Grain, although clearly preaching to the converted, not only confirmed that the Stuffies have crafted some fine works over the decades, but also that they just seem to get better with time. Hunt still possesses all of the magnetic frontman's exuberance that coursed through him in the early 90s. His voice has become slightly richer. The resplendent, trademark locks remain. Erica Nockalls' fiddle playing gives the band's sound an extra profundity and gravity that you'd associate with violinists like Lau's Aidan O'Rourke or "Purple Electric Violin" loopmeister, Ed Alleyne-Johnson - in immediate evidence on opener, "Don't You Ever" from their latest release, "30 Goes Around the Sun." Bassist Mark McCarthy drove the rhythms on mightily from a wheelchair and in a leg cast, making a welcome first appearance on the tour, having previously been attacked by a scaffolding lorry when out cycling.

1987 to 1991, and especially "The Eight-Legged Groove Machine", "Hup" and "Never Loved Elvis", dominated the twenty-three song setlist. Successive 'Elvis' tunes, like the run of "Here Comes Everyone", followed by "Mission Drive" (documenting Hunt's falling out with Clint Mansell of PWEI) and "Caught in my Shadow", or the pairing of "Size of a Cow" and "Welcome to the Cheap Seats" sent the crowd apesh*t. Lost property filled swiftly with everyone's inhibitions. The more the middle-aged indie kid next to you moshed like they were mashed, the more you gave it a 'when in Frome' shrug and jumped right in with them. The energetic connotations of "Hup" came through in the typically-scathing and still-too-relevant "Radio Ass Kiss" and rock 'n' roll ceilidh "Golden Green".

As McCarthy was on wheels, that technically made the band eight-legged. The 'Groove Machine' of those proportions was represented by the breakneck, tongue-twisting "Unbearable" early on, to get the crowd going. "A Wish Away", the earlier-mentioned number-72 chart smash and "Poison" closed the set. Despite the overtly retrospective focus, their 21st Century tracks stood up to scrutiny, with "Be Thy Name" representing 2012's "Oh No It's. The Wonder Stuff" and "Good Deeds and Highs" from "30 Goes Around The Sun" providing what Hunt called a mid-set 'chill out for the over-50s'.

That they could enchant the crowd so thoroughly for so long and still not play, "It's Yer Money I'm After, Baby", "Hot Love Now!" or "Don't Let Me Down, Gently" makes you wonder whether they could be their own support band and play all night. As it was, the support, Bristol-based Gaz Brookfield, warmed up the crowd rousingly with his confessional, witty, poignant, anecdotal songs such as "Diabetes Blues" and "Be the Better Man". He ended by high-fiving his early-teenage self through a space/time continuum at the prospect of supporting his indie icons.

Those icons finished with a six-track encore, generous in the extreme, including 1994's "Full of Life" ('Are you happy now?' - Yes we are, Miles, but please sing a couple more anyway) and singles, "Circlesquare" and "Who Wants to be the Disco King?" after which Hunt suggested 'Let's do this again sometime, right?' B-side to "Unbearable", "Ten Trenches Deep" with its mantra 'we'd like to go out with a bang' wrought delightful mayhem to close proceedings.

When The Wonder Stuff reached number one with 'that Vic Reeves thing' in November 1991, they knocked U2's "The Fly" off top spot. Whatever happened to those nice Irish lads, eh? 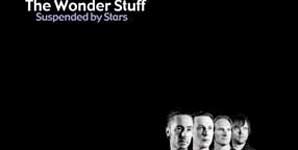 The Wonder Stuff - Suspended By Stars