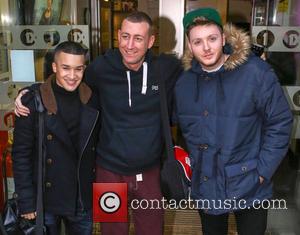 Despite X Factor's Christopher Maloney garnering an inordinate and confusing amount of votes, at the moment, James Arthur is The X Factor's golden boy. This isn't only down to his heart melting voice and lyrics, but to his boyish charms and good looks which are already proving very popular with the ladies.

STV reports that him saying: "I'd love to fall in love and find a soul-mate. I'd like to meet a girl who I can write songs for and connect with on an emotional level. I'm quite a sensitive, fragile soul and I like to be looked after." Adding, "I've had a little bit of fun but nowhere near as much as people would have you believe. I wouldn't have the time or stamina to be dating all those lovely ladies. I'll definitely be up for pursuing some of the offers I've received after the show..."

In the run up to the final on Saturday, James Arthur has returned to his home county and Middlesbrough for a free gig for local fans tonight. Nicole Scherzinger arrived on the back of a motorbike dressed in leathers ready for James to show her around. According to the BBC this free gig is the first that he's performed to his local fans since appearing on the show, and one which he's more than happy to give. "It feels like the ultimate sense of achievement, the viewers like what we do and they want to see us in the future, so it's a real honour that people pick up the phone." He added, "There wasn't a lot to be proud of in the past for me, so to see them pleased to have their brother achieving good stuff - it is very nice for me."