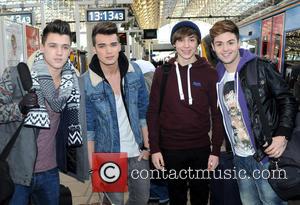 It looks like x factor host Dermot O'Leary and co-judge Nicole Scherzinger showed up to the wrong set earlier this week, as the pair winded up pulling pints at Coronation Street's world famous Rovers Return pub, as opposed to getting ready for tonights X Factor grand finale.

Whilst everyone else involved in tonight's (Dec 8) live final, O'Leary and his Pussycat Doll sidekick found time to sneak away from final of the ninth X Factor series to visit one of Manchester's most famous pubs. Nicole tweeted a picture of the two on Thursday (Nov 6) behind the bar at the Rovers with the pints they pulled, with the cheeky caption "Oh... Just another day at the office!" - but judging by the standard of their pints, its probably best if they stick to their day jobs.

After the little excursion though it was time to get back to work, with Dermot heading back down to the studio to check out the rehearsals and Nicole getting ready for a few rehearsals of her own. As was the case last year, the final three acts will perform a duet with their mentor as part of their farewell performance, meaning Nicole will be singing twice with her pupils James Arthur and Jahmene Douglas, whilst top dog judge Gary Barlow will be taking to the stage to sing with Christopher Maloney. Next year, we really do hope that one of Louis' lot make it to the final to see how he does.

Rihanna, One Direction, Rita Ora and those who failed to make it through to the final will all perform this weekend, with the final airing tonight on ITV at 8pm, with the result being revealed tomorrow night at the same time.