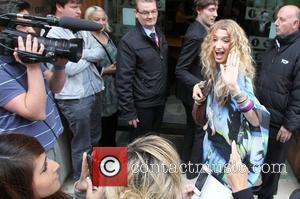 Is an x factor 2012 boycott on the cards? According to the Daily Record, a huge number of fans, including some celebrity viewers of the show – have decided that after last Sunday’s fiasco (October 7, 2012), they will no longer tune into the show. 'X Factor' has been plagued with allegations of results fixing, since one of the show’s producer’s was seen “crawling along the studio floor to have a word” with X Factor judge Louis Walsh.

Louis initially seemed to opt to save Carolynne Poole, from Leeds who was undoubtedly the more talented singer in the sing-off. However, Louis then back-pedalled and eventually said that he wanted to the vote to go to a deadlock, meaning that camp Rylan got through on public votes. Fans of the show were outraged; the actress Tamsin Outhwaite vowed not to watch the show again, saying “I feel free knowing I will never watch 'X Factor' again after last night’s fiasco. My weekends are mine again.” The comedian James Corden also branded the decision ”bullsh*t.”

The producer who spoke to Walsh during the sing-off was 62 year-old Richard Holloway. He released a statement to defend himself and the show against allegations of fixing, which read “We regularly chat to the judges during the show…On Sunday I was telling Louis the order the judges would vote in. We don’t tell the judges how to vote.” A show source said that Sunday night’s show had been “a shambles.” This could go either way for 'X Factor'. Disgruntled pessimists convinced of foul play may decide to leave the house for a change on a Saturday night. On the other hand, the rest of the country might start tuning in to see what all this fuss is about. And many viewers will simply want to see if Gary Barlow has stopped sulking about it all, yet.