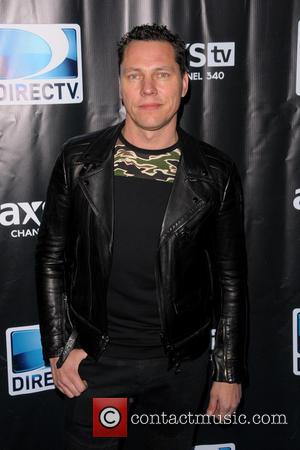 Dj Tiesto was hospitalised on Friday (21Mar14) after hitting his head on a screen onstage during a tour stop in San Jose, California.

The 45 year old was making his way on to the platform when he banged his head on the Led screen above him and fell, according to Tmz.com.

Tiesto reportedly tried to play through the pain after the accident, but his management would not allow him to continue and forced him to seek medical help.

He subsequently had to cancel his performance in Los Angeles the next day (22Mar14) after receiving stitches and finding out he had suffered a concussion.

Taking to his Twitter.com blog on Saturday (22Mar14), he wrote, "I had an accident and got a concussion at last night's show. Dr's told me to rest so no show tonight. Thanks for your concern and support!"

He added, "I hope everyone has a great time tonight at Palladium in La..I am so sad I have to cancel...and thanks brother @zedd for stepping in!"