Actor Til Schweiger Is Calling For More Of His Fellow Celebrities In Germany To Speak Out Against The Ongoing Racist Attacks On Refugees Who Are Finding Solace In Their Country. 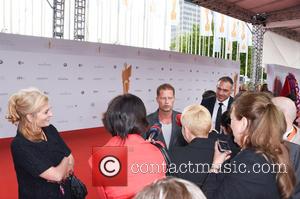 The Inglourious Basterds star recently came under fire after hosting a charity drive in Hamburg in which all donations would go to the thousands fleeing war and violence in their native countries.

A record-breaking 450,000 refugees from places such as Syria, Iraq and Afghanistan have moved to Germany in an effort to live peacefully, but it has divided German citizens, and Schweiger, a supporter of the refugees, has been slammed via social media by people who don't align with his beliefs.

Schweiger responded to the critics in a series of expletive-filled posts on social media, but he stands by his argument, even though he added more fuel to the fire.

He tells Variety, "It was a shock for me to see that there are obviously more people in Germany with fascist opinions than I thought there would be. There was an Internet sh**storm against me the highest imaginable level. They came out of the woodwork because they don't have anything to fear - because there are no consequences against racism."

Schweiger hopes his outspoken stance will entice other Germans, especially those with celebrity status, to join him in shunning the racism that is brewing in their country.