Tilda Swinton now has her own Tumblr page, dedicated to her latest piece of art. 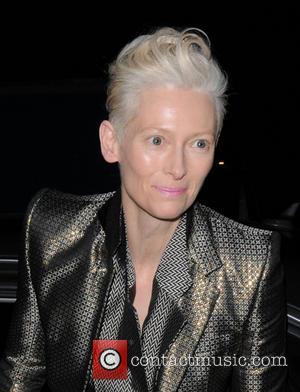 Modern art fans, movie buffs and hipsters alike flocked down to the Museum of Modern Art in New York this week to see Scottish actress Tilda Swinton sleeping in a big glass box. Her piece 'The Maybe' - originally devised in collaboration with Cornelia Parker - sees Swinton in a state of slumber while museum visitors and culture critics stare at her, and it's all in the name of art.

A furious and largely predictable debate has erupted as to whether Tilda Swinton sleeping in a box can be considered art, though - let's face it - all New Yorkers really care about is that Tilda Swinton, star of Burn After Reading, We Need To Talk About Kevin and Moonrise Kingdom is sleeping in a box. Swinton-mania is reaching boiling point and with news that the actress will only feature in the exhibition 'occasionally' - there's now a dedicated Tumblr dedicated to answering the question of the minute, "Is Tilda Swinton Sleeping In A Box?" The answer today is, "Yes. Tilda Swinton is sleeping in a box today at MoMA. It's art."

According to People magazine, Swinton has had her fair share of celebrity visitors, including Sarah Jessica Parker, Matthew Broderick and James Franco, though not everyone is impressed. The New York magazine's Jerry Saltz was seething at the fact that - even in today's uncertain times for the arts - the museum is overcrowded. "Visiting there now is unpleasant because the museum has been so overcrowded since its 2004 makeover. The event also has inner content: MoMA is narcissistically puffing its celebrity feathers, playing at being avant-garde." Perhaps sticking Tilda Swinton in a glass box now-and-again will encourage those who wouldn't normally trek out to the museum to stop by, and, who knows, take a look at the other non-Tilda Swinton work while they're at it.

Go and enjoy Tilda Swinton sleeping in a glass box. Tilda Swinton At The Cannes Film Festival in 2011