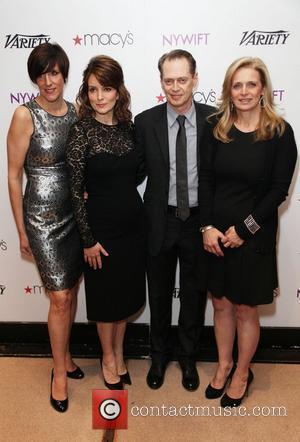 Not content with being one of the hottest comedy writers and actresses around, Tina Fey is showing her worth as a rapper, too. Okay, so it may be a tongue-in-cheek effort but it's still pretty impressive, even for its comic qualities. Fey makes an appearance on Childish Gambino's 'Royalty' mixtape, which he released on Wednesday. It's a free mixtape and Mr. Gambino (an alter ego for the actor Donald Glover) asked Fey to contribute a rhyme or two.
Fey obliged with a cameo at the end of the last track of the mixtape, entitled 'Real Estate'. Her lyrics start off with a cockiness typical of many rappers, before descending into a reluctance to swear on tape: "Yeah, we in here, we in this thing/ Gambino is forever, 'Royalty' is forever ... My president is black and my Prius is blue, motherf---r/ 'Royalty' all day, we droppin' racks at Nordstrom, son. That's racks on rack dammit, you feel me? This is the part where most people would say something crazy and drop the N-word after it. Not going to, I'm not doing that, I don't feel comfortable! I'm out!"
Fey is no stranger to rap parody. In the last season of '30 Rock', her character Liz Lemon donned an orange jumpsuit and took on the persona 'Lemonem.' Donald Glover and Tina Fey first met when Glover worked as a writer on '30 Rock.'