Tinie Tempah had a surprise party after getting to number one last month with his Jess Glynne collaboration 'Not Letting Go'.

Tinie Tempah had a surprise party after getting to number one.

The 26-year-old rapper was treated to the bash after he topped the UK singles charts last month with his single 'Not Letting Go', admitting it was ''great'' to have all of his ''loved ones'' with him to mark the milestone.

Speaking at MTV Crashes Plymouth he exclusively told BANG Showbiz: ''My team were really sweet and threw a surprise party for me. I've been in the studio quite a lot recently so I was literally in a session and my manager came to the session making me feel like I had to go to a meeting afterwards and when I got to the place it was all my record label, all my family, all my loved ones and it was great.''

As well as his friends and family, the 'Pass Out' hitmaker was joined by Jess Glynne who sings on the track, but she was unable to talk at the reception having recently undergone surgery on her vocal cords.

He said: ''Yeah she was there, even though she couldn't talk!''

However, Tinie is confident the star will recover soon and has sent his well wishes to the 25-year-old musician.

He added: ''But hopefully she'll be feeling better soon.'' 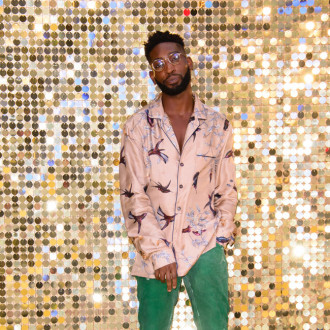