The Table Tobey Maguire And Liev Schreiber Played Chess On As Bobby Fischer And Boris Spassky In New Movie Pawn Sacrifice Was The Actual One On Which The Two Masters Fought For The World Title In 1972. 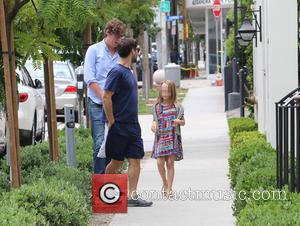 Director Ed Zwick found the table while filming in Iceland, where the famous match took place, and persuaded the owners to let him ship it back to Montreal, Canada, where he filmed the clash of the chess titans.

Zwick says, "The final match between Tobey and Liev is played on the actual table. It’s a nice thing for the actors and for all of us to know that we’re somehow being informed by the truth to that degree."

During their stay in Iceland, Zwick and Maguire also tracked down the board Fischer and Spassky played chess on.

The director adds, "It was signed by Boris Spassky and Bobby Fischer."

Zwick even had chairs specially made so they'd look exactly like the ones the chess masters sat on: "We had the chairs they sat on remade by the Herman Miller company, because they are made differently now. We had them manufacture four chairs for us that were exactly like the ones Bobby and Boris would have used."