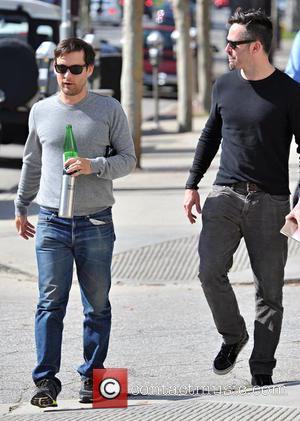 Tobey Maguire's daughter delighted guests at rocker Linda Perry and actress Sara Gilbert's wedding on Sunday (30Mar14) by taking to the stage to perform a song for the newlyweds.

The couple exchanged vows in Malibu, California over the weekend and Juliette Lewis, Steven Tyler, Spider-Man star Maguire and Gilbert's The Talk co-hosts Sharon Osbourne, Aisha Tyler, Sheryl Underwood and Julie Chen were all in attendance.

According to reports, the ceremony was more like a rock concert, with performances from 1980s artists including Bow Wow Wow singer Annabella Lwin, Missing Persons' Dale Bozzio, The Motels' Martha Davis and Terri Nun from Berlin, but the highlight of the show came when Maguire's seven-year-old daughter Ruby hit the stage to belt out a cover of Cyndi Lauper's Girls Just Want To Have Fun, reports Tmz.com.

Former 4 Non Blondes frontwoman Perry also showed off her musical talents by teaming up with Nun to sing Berlin's Sex (I'm A...) hit.