Ex-scientologist: 'Holmes Was Picked For Cruise After Audition Process' 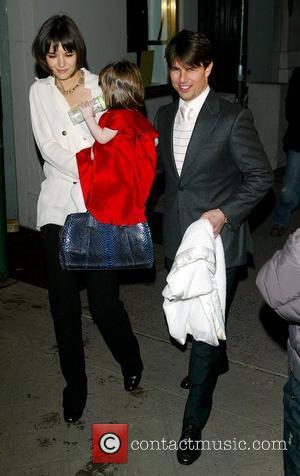 Hollywood star Tom Cruise's marriage to Katie Holmes was set up by the Church of Scientology after a series of fake casting calls for actresses including Jennifer Garner and Jessica Alba failed to deliver a suitable wife, according to sensational new claims by a former Scientologist. Cruise and Holmes wed in a fairytale ceremony in Italy in 2006 after a whirlwind 20-month romance and have one-year-old daughter Suri together. But ex-Scientologist Marc Headley - who used to produce promotional films for the controversial religion - claims Holmes was set up with the Mission: Impossible star after he split from Penelope Cruz in 2004 after three years together. Headley alleges Scientology leader David Miscavige organised an audition process for potential wives disguised as a casting call for a new movie in which Cruise was the leading man. He tells British tabloid News of the World, "After that (splitting from Cruz), he started complaining to his best buddy David about his luck with girls. So Miscavige assigned a high-ranking official with the order: 'Find a wife for Tom Cruise.' "The official put out a casting call to female actresses, including Scientologists, saying, 'There's an upcoming Tom Cruise movie you might get a part in. Come for an audition.' But in the end no movie was made. They had to be single, they had to be pretty and in their 20s. "First they rounded up Scientologist actresses like Erica Christensen, Erica Howard and Sofia Milos. But they were all rejected." The unnamed official then tried to lure Electra star Garner - who had just started dating Ben Affleck at the time - with the beauty ranked top of the priority list, before Holmes was spotted gushing about Cruise and called to Los Angeles to meet the actor. Headley adds, "Then... they went for Jennifer Garner, Scarlett Johansson and Jessica Alba, in that order. They came up with the same plan. Jennifer and Jessica didn't bite but Scarlett took the bait and came in for an audition. When she arrived at the audition address and found out it was the Scientology Center in Hollywood she freaked out and didn't do a tape... "So they worked the audition tape on Katie, got her to L.A. and introduced her to Tom. The moment he meets her, he's enthralled with her and he told Miscavige later, 'I knew immediately she was the one.'"