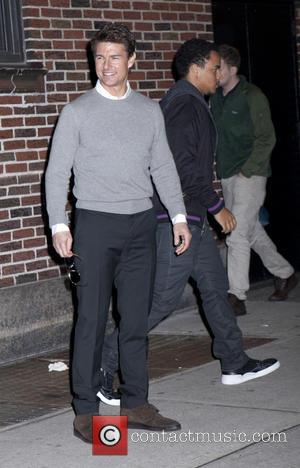 Perhaps it’s the actor’s international fame, coupled with his Scientologist beliefs and kooky behavior at times, which turn him into such an easy target, but whatever the cause, there’s no doubt that the Jack Reacher actor has faced his fair share of controversy over the past years. This latest dose comes in the form of a book, aimed at Scientology in Hollywood, entitled Going Clear: Scientology, Hollywood, and the Prison of Belief, penned by Pulitzer-winning writer Lawrence Wright. In the book, Wright exposes what he claims is the truth behind Cruise’s now broken marriage with Katie Holmes. The author claims that the union followed a casting call for young, beautiful A-list actresses, who thought they were auditioning for a part in the Mission Impossible franchise, but were instead being screened for the role of Cruise’s newest squeeze.

The expose, outlined in Us Weekly, also talks about Cruise’s failed relationship with actress Nazanin Boniadi and the influence that Scientology had on the breakup and on Boniadi afterwards. And to wrap up the increasingly disturbing rumours of arranged marriages, casting calls for girlfriends and feverish political ambitions, the book goes on to talk about Cruise’s supposed presidential dreams. At one point, the actor is quoted as saying: "If f--ing Arnold can be governor, I could be president." A lawyer for the actor denied the exchange ever took place or that Cruise has any political aspirations. Whether or not anything in the book is true, this might make a sizeable dent in the actor’s already shaky reputation.

It is ludicrous and absurd to suggest our Church inserts itself into the romantic or matrimonial affairs of its parishioners. Every allegation made about the Church concerning Mr. Cruise's supposed political ambitions and his relationships are false and nothing more than tabloid innuendo.

Mr. Cruise certainly has no trouble getting a date. No one from the Church ever launched any kind of project to find a potential bride for Mr. Cruise such as the one described. This tabloid rumor was first published years ago and continues to circulate, sourcing to Marc Headley. He admitted in a deposition to selling similar stories to the now defunct News of the World for $10,000 and for $6,250 to Life & Style. The Headleys are extremely bitter in part because their twin lawsuits filed against the Church were recently thrown out by a federal court and affirmed on appeal and they owe the Church $42,000 in court costs. Mr. Headley is bitter and unreliable and has told no less than three versions of his ever-morphing story.

In his 2009 self-published book, Mr. Headley described his so-called knowledge about the alleged audition, which he wrote was limited to his supposed learning that his associate was allegedly reviewing and cutting audition tapes of Scientologist actresses for an undisclosed project. Then, in a July 8, 2012, interview on the Today Show, Mr. Headley's story expanded-he now claimed to be involved in the auditioning process as opposed to allegedly learning about it. He then made statements that were aired on Dateline, where he claimed "the team" located Ms. Holmes by spotting her in Seventeen magazine.

Then, in the Vanity Fair article, his story changed again.  There, Mr. Headley claimed another actress was selected by the "team," with no mention of Ms. Holmes.  Mr. Headley also retreated from his 2012 claim to Josh Mankiewicz of Dateline that he videotaped the "auditions" and said he only watched them.

In summary, Headley is lying and Mr. Wright's book is transparently inaccurate and biased.

The author and the publisher refused to provide the Church with a copy of the book and showed little interest in receiving input from the Church during the writing or so-called "fact-checking." In the two years that Mr. Wright spent on his book he sent the church only a dozen isolated and esoteric "fact checks."

The one thing clear about Lawrence Wright's book is that he continues to carry water for a handful of angry, bitter individuals led by a pathological and self-admitted liar still consumed with vengeance a decade after being removed for malfeasance. Mr. Wright could have chosen to write a serious, objective and fair book on Scientology that also would document the religion's growth worldwide as well as its involvement in such causes as human rights and the fight against drug abuse. Instead, Mr. Wright has taken the easy path and produced a work of fiction.

The New York Times all but accused Lawrence Wright of inventing dialog for his 2006 work on al-Queda, The Looming Tower, criticizing his "verbatim reconstructions" of conversations more than a decade old, writing that "it's hard to believe that memories are that good."  Here, he purports to reconstruct conversations six decades old.

It is important to note that Wright's British and Canadian publishers had second thoughts choosing not to publish Wright's book after being informed of the numerous inaccuracies and defamatory lies it contains that were told to Wright by a handful of bitter and discredited former Scientologists. If a book is truthful, then it should be publishable without hesitation. Freedom of speech does not mean freedom to lie.