Tom Cruise got involved in a dance-off at a wedding in Palm Springs, California, last weekend. 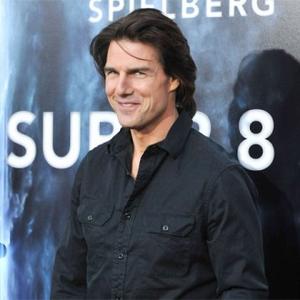 Tom Cruise got involved in a dance-off at the weekend.

The 'Mission: Impossible - Ghost Protocol' star was a guest of technology billionaire Larry Ellison at the wedding of his son David and actress Sandy Modic in Palm Springs, California, and showcased his fancy footwork at the reception.

Tom, his wife Katie Holmes and their five-year-old daughter Suri had attended the ceremony, but put their daughter to bed before hitting the dancefloor.

A source told the New York Post newspaper: "Hole in One. Suri went to bed before the reception, and then Tom had a dance-off with a few of the guys in the wedding party."

This is not the first time Tom has got himself involved in a dancing showdown. At the Mtv Movie Awards last year he reprised his role as Hollywood producer Les Grossman from 'Tropic Thunder' and pulled out some of his character's madcap trademark moves in a battle against Jennifer Lopez.

Tom's wedding performance possibly saw him trying out some of the dances he's been learning on set for his latest role as Stacee Jaxx in new film 'Rock of Ages', an adaptation of a Broadway musical, about a rocker trying to make it in Los Angeles in the 1980s.

The 48-year-old actor was a huge hit on set, "astonishing" the crew and his co-stars with his voice and moves.

Julianne Hough - who appears alongside him in the film - has said: "I'm not kidding, the guy can sing, the guy can dance, the guy obviously can act. I mean, he can do it all, and he does it all very well.

"I wasn't there for the first day of shooting for his stuff, but I just got people emailing me, like, 'Oh my gosh,' chills, standing ovation, holy crap, the crew was blown away."