Tom Cruise To Star In Guy Ritchie's 'The Man From U.N.C.L.E'? 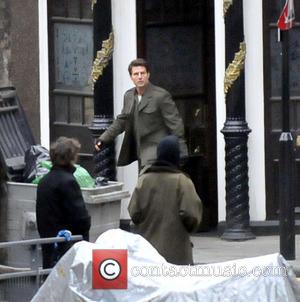 Picture: Tom Cruise - Tom Cruise filming a scene outside a pub for the movie 'All You Need is Kill' - London, United Kingdom - Sunday...

Tom Cruise is in early talks to play in the lead in Guy Ritchie's forthcoming movie 'The Man From U.N.C.L.E' based on the original TV series starring Robert Vaughan and David McCallum as two agents of the United Network Command for Law Enforcement. Warner Bros has wanted to make the project for years, originally with George Clooney in the lead and Steven Soderbergh behind the camera.

According to Deadline.com, Clooney dropped out because of surgery on his beck and back, while Soderbergh left soon after. The studio soon turned to Ritchie - who helmed the Sherlock Holmes movies - and his producing partner Lionel Wigram. It would be the latest high profile role for Cruise, who will star in another Mission: Impossible movie developed by Christopher McQuarrie as well as another Jack Reacher movie. The first film based on Lee Child's crime novels grossed more than $215 million worldwide.

Warner Bros began quiet talks with Cruise for The Man From U.N.C.L.E after he completed All You Need Is Kill with director Doug Liman. Though the film is yet to be released, the studio's eagerness to sign up Cruise again suggest it's pretty impressive. He next stars in the futuristic sci-fi movie Oblivion, which hits theaters on April 19, 2013.

Ritchie's last movie, Sherlock Holmes: A Game of Shadows, was a runaway success and attention has already turned to a third movie to complete the trilogy.