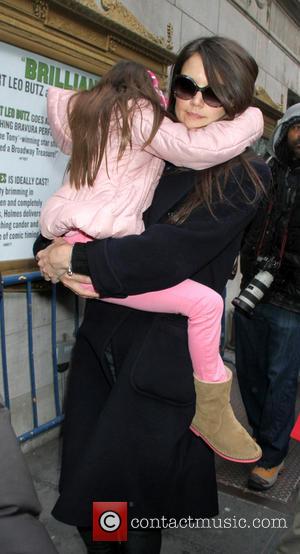 Tom Cruise and Katie Holmes' little girl Suri celebrated her 7th birthday this week, with her movie star father throwing her a pretty tasty sounding party. It's been a busy year for Suri having started first grade school, though she's been in high spirits in recent weeks and was snapped attending an Easter party in New York City on March 31, 2013.

On Wednesday (April 17, 2013), Cruise called into Ryan Seacrest's KIIS-FM radio show to discuss his new movie 'Oblivion' though attention quickly turned to Suri's birthday celebrations. "Done already. All done. I take care of the kids early. You'll know - you have to plan ahead for these things. It's all done and all celebrated," he said. Though keeping mum on the details of the celebrations and perhaps hinting that he and Suri had a separate celebration to she and mother Katie, Tom added, "I'll eat cake, cupcakes. I eat all that stuff!"

In June last year, it was announced Holmes has filed for divorce from Cruise after five and a half years of marriage. The couple signed a divorce settlement worked out by their lawyers though mutually agreed to have Suri live with her mother. After initially being home-schooled, the 7-year-old now attends the Convent of the Sacred Heart in New York City.

Tom Cruise's new sci-fi movie 'Oblivion' is expected to debut to around $30 million at the box-office this weekend.