Tom Daley will appear on Saturday night's episode of 'The Jonathan Ross Show' where he addresses the announcement of his relationship with Dustin Lance Black, stating the public will see the "true Tom." 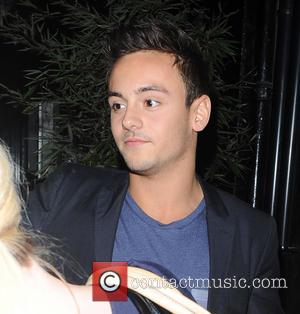 Picture: Tom Daley - Tom Daley leaving Itsumo Japanese Restaurant after having dinner with friends. Tom was earlier recording for the Jonathan Ross show at the...

British Olympic diver Tom Daley opens up about his decision to announce he is in a relationship with another man, via a YouTube video, on 'The Jonathon Ross' show.

The video was posted on Dec 2nd and has garnered worldwide attention with it being viewed over 8 million times.

Although the 19 year-old didn't reveal the man's identity, it was later reported to be 39 year-old Academy Award winning screenwriter, Dustin Lance Black.

Daley didn't hesitate to discuss his new boyfriend and told the host, "It was love at first sight. I've never felt anything like it - and I made the first move."

He also expressed relief as the public can now see the "true Tom".

The Plymouth native also said, "It felt like it was my dirty little secret, like I had chains round me and I couldn't say anything and I couldn't be who I wanted to be. I felt like there was something wrong with me, I didn't know other people out there felt that way."

Dustin, who is 20 years his junior, didn't even make the first move when they met at the Kids Choice Awards in LA in March (2013).

Daley explains, "We were at a party and I hadn't even spoken to him all night. I didn't know what to do or if he was gay at first. I made the first move, I typed 'call me' in his notes with a smiley face on this phone and the next day he texted. He makes me feel safe and happy, right now I couldn't be happier."

"I'd never felt the feeling of love, it happened so quickly, I was completely overwhelmed by it to the point I can't get him out of my head all the time. I've never had it before where I love someone and they love me just as much," he continued to gush.

Good luck to the both of them!

To see the full interview watch 'The Jonathon Ross Show' on Saturday night at 10.45pm on ITV.