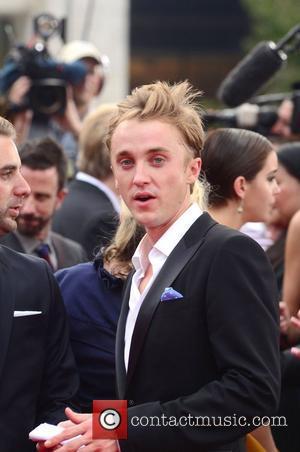 Tom Felton has responded to Emma Watson's claims that the actor was her very first crush, reports Access Hollywood. Felton, who plays Harry Potter villain 'Draco Malfoy', said he was flattered upon hearing the news.
Speaking at the press conference for 'Harry Potter and the Deathly Hallows: Part 2' in New York City, the actor said, "Very flattering.We're going back a few years here. I heard it through the grapevine". Felton says he and Watson can "laugh about it now", adding, ".but as testament to how long we've been doing this for, I'm pretty sure she was about 9, possibly 10. but yeah, very flattering". The final instalment of the hugely popular movie franchise hits cinemas on 15th July 2011 and Tom said it's been tough leaving his character behind, saying, "It's weird saying goodbye to him. I haven't stepped into Draco's shoes now for over a year-and-a-half and I definitely miss him.He's very different from me, but he's a lot of fun to play. So it's sad to say goodbye to him". Felton, who attended the New York premiere of the final movie on Monday (11th July 2011) has appeared in all eight of the Potter movies.
Tom Felton is set to begin filming the war movie 'Grace and Danger', about allied soldiers who rescue a young woman from a village massacre. The film also stars Tom Sizemore and TOMMY FLANAGAN.