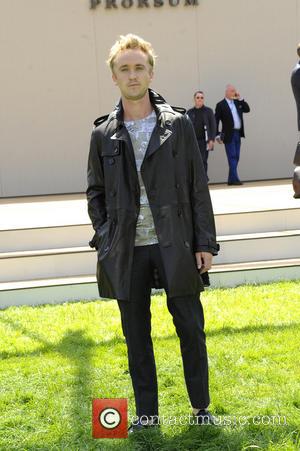 British actor Tom Felton attempted to trick his Harry Potter co-star Rupert Grint by going undercover as an obsessed fan at his Broadway show over the weekend (15-16Nov14).

Grint is making his debut on the Great White Way alongside Matthew Broderick and Nathan Lane in It's Only a Play, and Felton was among the patrons in the audience during one of his recent performances.

Following the show, Felton opted to wait with other fans outside the stage door for Grint, and stayed behind a barricade wearing a hat, wig and glasses, hoping his pal wouldn't recognise him right away.

A fellow theatre-goer noticed Felton and posted a photo of him in disguise on Instagram.com, noting that the actor was going under the name "Bob" as he stood in line.

When Grint reached "Bob", Felton asked the star for an autograph, and Grint finally realised it was his friend underneath the costume.

The onscreen foes have been known to play pranks on each other over the years - Grint once showed up to Felton's premiere of Rise of the Planet of the Apes wearing a shirt which read, "I Heart Tom Felton".

Felton got him back by donning a "I Heart Rupert Grint" tee while promoting the Harry Potter Studio tour.