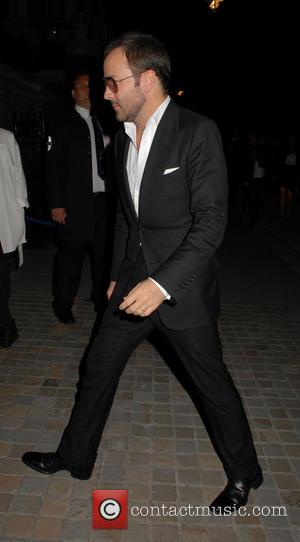 Top fashion designer Tom Ford has paid a special tribute to R&B star Rihanna, hailing her as "one of the most beautiful women" he has ever met in a new blog entry.

The gay style guru took to his website this week (begs03Nov14) to share his thoughts on the criticism surrounding his provocative spring 2015 collection, and he admitted drawing inspiration from contemporary barely-there fashions favoured by stars like Rihanna, who famously showed off her bare breasts in a sheer, glittery halter neck dress at the Council of Fashion Designers of America Awards in New York in June (14), when she was handed the 2014 Fashion Icon prize.

Recalling the event, at which Ford was also honoured, he writes, "I was at the Cfda awards as I was receiving a 'Lifetime Achievement Award'... and I have to say that Rihanna was for me, that night, one of the most beautiful women that I have ever beheld.

"I had designed several things for her specifically for that evening which she did not wear, but when I saw her it did not matter. I whispered into her ear that she was right not to have worn one of my dresses that night because she looked more beautiful than I have ever seen her look. She was stunning.

"As (his husband) Richard (Buckley) said plainly after the evening, 'If you are as beautiful as Rihanna, you almost owe it to the world to appear in public almost nude' and I have to say that I wholeheartedly concur."

The blog entry caught the Stay hitmaker's attention on Tuesday (04Nov14) and she shared her gratitude on Twitter.com with the message, "i.heart.Tom.Ford".