Tom Hardy has revealed it took him over an hour to switch between the roles of Reggie and Ronnie Kray for new gangster film 'Legend'. 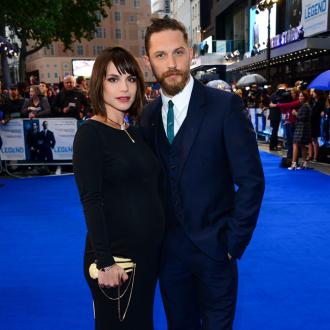 Tom Hardy has revealed it took him over an hour to switch between the roles of Ronnie and Reggie Kray for 'Legend'.

The 37-year-old actor portrays both twin brothers - who were notorious London gangsters in the 60s - in the new real life crime film and he had to don fake teeth, hair and a nose to portray Ronnie compared to his natural look for Reggie.

Hardy and his make-up artist had to master the process quickly because they only had seven weeks to shoot the movie.

Speaking at the press conference for the film in London on Thursday (03.09.15), he said: ''It took about an hour to an hour-and-a-half (to change). It had to be quick, we had teeth, a wig, we had to plump up the nose, ageing stipple make-up. So there was about an hour's worth of make-up between Ronnie and Reggie but we only had seven weeks to shoot so couldn't faff about, we had to do it quite quickly. There were also wedges in the shoes because Ronnie had to be a bit taller, and an extra layer of shirts so he's shirts were bigger, a double-breasted suit, waistcoat, glasses so there was a different silhouette between the two guys but it all had to come in an hour to an hour-and-a-half.''

Christopher Eccleston plays Detective Chief Superintendent Leonard 'Nipper' Read, the police officer who pursues the Krays for their crimes and eventually puts them behind bars.

His make-up routine was significantly quicker than Hardy's but he was astonished by how much he looked like his late grandfather when dressed as his alter ego.

Eccleston explained: ''I looked exactly like my paternal grandfather, and he was a frightening man! I was struck by that when they put me in the gear and I based it on him, his effect on me as a child and his basic outlook as I imagined it.''

Both Hardy and Eccleston attended the world premiere of 'Legend' at the Odeon Leicester Square cinema in London last night.

At the event, Hardy and his wife Charlotte Riley - accompanied by their pet dog Woody - announced to the world they are expecting a baby together as Charlotte's figure-hugging dress showed off a burgeoning baby bump.

Hardy and Eccleston were also joined by their co-stars Emily Browning, David Thewlis and Tara Fitzgerald on the special blue carpet as well as a host of stars such as former Smiths singer Morrissey.