Review of Praise and Blame Album by Tom Jones

Predictably, the concept of Praise and Blame has repetitively been likened to that of the late Johnny Cash and his own covers album American IV: The Man Comes Around. And it's a fair observation, it's hard to imagine the idea coming from anywhere else, this too is a stripped down covers album, if not a little less sombre than Cash's latter day effort but is similar in its intentions to attract a newer audience. 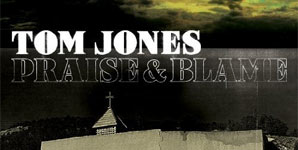 There is also the little matter of the 'controversy' that surrounds the release of this album, whether you bought into the record company vice chairman's 'leaked email' to colleagues, enquiring whether Jones's latest effort was 'some sick joke?' Or if you're the cynical kind, that saw it as a blatant publicity stunt, you can't deny that it has raised the profile of Praise and Blame and stopped it from slipping under the radar.

But what of the oh so controversial content of the album? Well the truth is, it's not very risky at all. These are by no means hymns as they were previously labelled. Also the fact that this idea has been executed before becomes an irrelevance due to the fact that nobody would've foreseen this kind of musical direction from the legendary Welshman, in this, his 39th studio album. And who can blame Mr Jones for taking a more credible route? Gone are the cheesy collaborations with the likes of Cerrys Mathews and Kelly Jones, and in their place, soulful earthy covers that cast him in a far better light artistically.

This album was recorded live, and it shows. There are heavy helpings of untamed passion throughout, and fiery John Lee Hooker song Burning Hell, gets more helpings than any other on the album. It brims with biblical anxiety as Jones resigns himself to a dark fate over some rather fitting, scuzzy guitar playing.

It's on the more energetic high tempo tracks that Jones shines most, the blues infused Lord Help pays testament to that, as Jones bellows 'Lord help the war torn people in this world' before organs intricately come together with some irresistible riffs. The same can be said for Don't Knock, which sees Jones vocals aided by some powerful backing vocals. It's only short at 2:15 but it has a kick to it, making it impossible to pass by without notice.

Jones's detractors might be right, Praise and Blame probably won't reach the commercial heights of 1999's Reload, but then Tom Jones doing pop music, really wouldn't wash these days anyway. Tom Jones has made an album that forms a credible and graceful chapter in his long and successful career.