Veteran Welsh Singer Tom Jones Was Convinced Jimmy Savile Was A "Good Man" Until The Legendary British Dj Was Unmasked As A Paedophile After His Death. 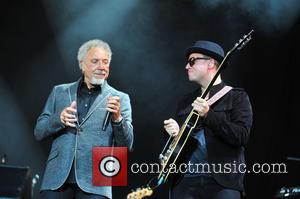 Jones admits he was "shocked" when revelations about Savile's crimes began to emerge after the TV and radio presenter passed away in 2011, because he had never seemed "creepy" to the Delilah singer.

He first met Savile in the 1960s and was grateful when the DJ helped him land a recording contract, but despite knowing Savile was into "teenage girls" Jones is adamant he had no idea his old pal was a serial sex attacker.

Jones tells BBC Radio 5 Live, "He always liked teenage girls, as long as they were over 16, which of course is legal. And you would always see him around with young girls.

"When you see someone like that, you would never think he would be a paedophile because of the way he handled himself. You always think of paedophiles as being like creepy people - maybe to some people he did look a bit creepy - but he was a bit of a Jack The Lad with young girls...

"I was shocked when it all came out in the newspapers because to me Jimmy Savile was a good man."

Despite murmurings of sexual misconduct, Savile avoided prosecution during his lifetime, but an inquiry sparked by allegations after his death led to the discovery of more than 400 victims of the disgraced presenter.