Review of Fire in the Doll's House Album by Tom Moriarty

Singer/Songwriter Tom Moriarty confidently bursts onto the scene with a full length studio album, Fire in the Doll's House. It's released with some anticipation, as Tom Moriarty has already received some excellent feedback for the title track which was released prior to the album. It's fresh, raw, folk based rock n' roll, it's gravelly and energetic music with the use of some different and sometimes unorthodox playing styles and ideas that work well together to produce, what seems to be, something quite special. 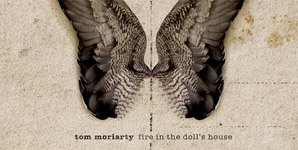 Fire in the Doll's House is clearly influenced by some older singer/songwriters, like Bob Dylan and some newer ones such as Mumford and Sons. The setting for the recording of the album, London's Abbey Road Studios, where The Beatles famously recorded their final album together, may also have been an influence on the music, and definitely on the way it was recorded. The recording itself sounds quite old-fashioned, and is extremely well mixed. It's a 'sing along' album and very catchy. In places it could even be said that it sounds a little like some songs written by Newton Faulkner. The album takes the listener on an epic journey, the first track feels like a long time ago if one listens to the album in its entirety.

However, it could be argued that the genre of singer/songwriter is quite tired; Tom Moriarty is very brave to go it alone. There are plenty of mainstream artists in the charts that could claim to come under the genre of singer-songwriter. Artists that are talented and good at what they do, but have nothing particularly special about them or any unique figures. Happily though, Tom's style of singing changes that, it's a breath of fresh air in a stagnated and stale style of music. The music has more energy than most singer/songwriters. It moves between different playing styles as the album progresses, from neo-political, soulful music to almost country and western style rock n' roll and back again, always punctuated by Tom's unique, gruff vocals behind it. It sounds inspirational, in so far as it sounds like each song has been inspired in its own right - none of the songs sound like they have been written to make up time.

Tom's soulful, gravelly style of singing sounds very weathered. It makes a pleasant change to hear this kind of singing placed in the setting of a singer/songwriter, rather than a whiny set of vocals. It's authentic singing - Tom Moriarty sings from the heart and accepts his own singing style and makes it work for the music he is making. He doesn't try to sing in a style that doesn't work for his voice, but instead plays to his strengths. There are also uses of some very unorthodox styles in the music that work extremely well - the use of a Gospel choir on Life's a Mystery is unexpected but pure genius. The use of the banjo on Don't Ask Why also raised a smile. Fire in the Doll's House sounds like it's full of ideas that Tom Moriarty wanted to experiment with. It would be interesting even to hear ideas that never made the final album, just to see what Tom Moriarty rejected when writing the album.

Lyrically, the album is extremely deep. The opening title track Fire in the Doll's House is extremely political, and not even in a subtle way, and the cleverly titled Smile if you Wanna Get High raises a smile from listeners, who then realise they smiled. The slower tracks such as Dance with Me and Sundancer raise an emotional response from listeners, they're very moving songs. The lyrics are designed to be listened to as words, rather than melodies.

In short, Tom Moriarty has done very well to combine all of the elements within his playing style into one musical package. The gravelly and often hoarse style of singing, the punchy, sometimes powerful rock n roll music and deep, moving lyrics merge to create something very different, but something very relatable, musically, to other artists and styles. It's very successful, and Tom Moriarty is one to watch, as his style adapts and evolves over time. He's a songwriter with a message, one that deserves to be listened to.