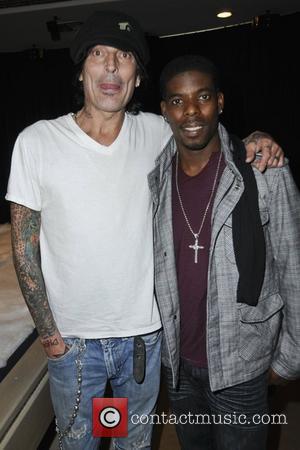 Tommy Lee's rock 'n' roll career is taking a funny turn - the Motley Crue drummer has signed on to collaborate on actor/comedian Dane Cook's next album.
The Good Luck Chuck star has been a longtime fan of Lee's rock group, and he seized the opportunity to work with his music idol after learning the feeling was mutual.
Cook tells MTV.com, "I used to love Motley Crue growing up and he's a big fan of mine. I called him (Tommy Lee) the other day and I said 'Would you collaborate on this thing that I put together?'"
However, Lee's fans have been warned his rhythms on the comedy record will be a departure from his drum bashing beats with Motley Crue.
Cook adds, "It's actually very different than anything (Tommy's) done before. He's a sensational drummer. I would say this is a little bit in the Jack Johnson vein, a little bit funky, a little jazzy."