The 40 year-old's recent personal struggles involving her cheating husband and the launch of her new Lifetime reality TV show have started to take its toll. 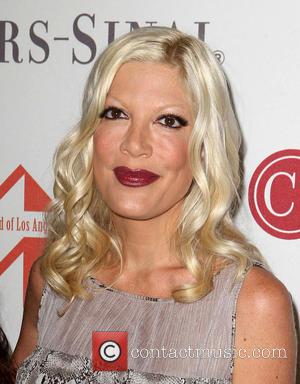 Tori Spelling's personal life is spiralling out of control and as this turmoil time continues, her health took a turn for the worse.

Dealing with her failing marriage and filming a reality TV show, 'True Tori,' the 40 year-old has found it too much to handle and as a result, she was recently hospitalized.

Although the reason for her stay in hospital has not been disclosed, E!News reports Spelling remained in the medical facility for a six day period.

The mother-of-four was released on Saturday afternoon (April 26th) around 3p.m and was assisted by her husband Dean McDermott.

According to the gossip site, a pink hospital tag was clearly visible on her wrist. Sources close to the situation commented on how McDermott was supporting his wife of nearly 8 years every step of the way.

"He would arrive by 10am and didn't leave until 8 most nights. He seemed very stressed out and worried," an observer said. ''He would bring food and often only left Tori to go outside to catch some air or make a phone call.''

This may seem surprising since the pair have been close to ending their marriage after news surfaced of the 46 year-old's recent cheating scandal.

The Canadian actor was promoting his new gig as host of 'Chopped Canada' in Toronto and stayed at Fairmont Royal York Hotel with Emily Goodhand (28), a woman he was introduced to that day via friends.

In a preview clip of 'True Tori', which documents their efforts to save their marriage, both McDermott and Spelling are filmed attending therapy sessions and discussing the cheating allegations.

"He was my soulmate, but he completely broke my heart," the 'Beverly Hills, 90210' alum stated in the session. "It makes you not trust anything that's happened in your relationship."

The first episode of 'True Tori' premiered on Limfetime this past Tuesday (April 22nd). McDermott cheated on Spelling in December (2013)