Tori Spelling has joked she would love to display her old breast implants in a glass dome on her wall next to her first bouquet from her marriage. 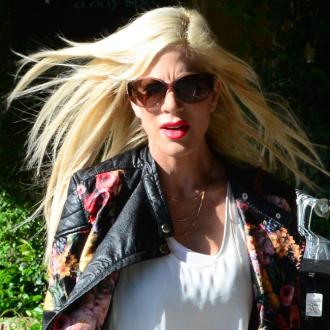 Tori Spelling wants to get her breast implants removed and display them in a glass dome on her wall.

The 41-year-old reality TV star is keen to have her fake boobs taken out because they have ''expired and recalled'' and should have been replaced 15 years ago, but the blonde admitted she doesn't want to forget her implants completely and would love it if they were displayed in her house.

Speaking to husband Dean McDermott on their reality show, 'True Tori', she joked: ''How are you going to feel about me having flaps there?

''Why don't we put them in a glass dome and I could put that on a wall next to my first bouquet from my marriage?''

The couple - who tied the knot in 2006 - discussed Tori's possible breast removal while attending a therapy session in the episode, and she later talked over the state of her assets with plastic surgeon Dr. Ashkan Ghavami, who explained her implants were in a ''pretty bad way''.

He explained: ''There's different degrees of the breast hardening. There's one, two, three, four. Yours is three, so it's pretty bad. It's almost as bad as it could be.''

While Tori was contemplating whether to get her implants removed immediately or in a couple of months, which she joked sounded like a ''boob vacation'', the doctor admitted she could end up with ''pancakes'' if she waited too much longer.

The mother-of-four - who has children, sons Liam, seven and Finn, two, and daughters Stella, four, and Hattie, three, with Dean - has previously admitted she regrets getting breast implants when she was younger.

Speaking in 2011, she said: ''I got my boobs done in my early 20s and if I had known it would or could possibly impact production of milk, I would never had had them done.''