It's been nearly four years since Tracy Bonham's Island debut, The Burdens of Being Upright established the petite-but-powerful singer/songwriter/multi-instrumentalist as a musical force to be reckoned with. The Gold-certified, twice-Grammy-nominated album, and its provocative signature hit "Mother Mother," struck an unmistakably responsive chord with the public, which enthusiastically embraced the classically-trained violinist turned guitar-slinging rocker's nakedly honest lyrics and raw-nerved songcraft.

Bonham's long-awaited sophomore album, Down Here, finds the artist expanding her unmistakably personal vision into compelling new areas of lyrical and musical expression. The 12-song album finds the debut disc's youthful anger and defiant swagger giving way to a more thoughtful-though no less explosive-perspective. Songs like "Behind Every Good Woman", "Fake It",

"The message of this record is 'just be yourself,'" notes Bonham. "On my last record I dealt with the pain of a destructive relationship and the issues you face in your early 20s. Now I'm more confident and comfortable with myself. These new songs dig deep and help me accept myself for who I am."

Bonham recorded the bulk of Down Here with the noted production team of Mitchell Froom and Tchad Blake, with three additional tracks produced by Mark Endert, who engineered Fiona Apple's Tidal. The album's musical cast includes Sebastian Steinberg of Soul Coughing on bass and Pete Thomas of Elvis Costello's Attractions on drums, along with former Soulwax drummer Steve Slingeneyer.

Where its predecessor stuck mainly to a straightforward, guitar-based rock sound, Down Here stakes out a more ambitious, idiosyncratic approach, encompassing a wide array of instrumental textures while placing an increased emphasis on Bonham's inventive, classically-schooled violin work.

"While making the first record, I rebelled against my classical training. At that time, I picked up my guitar and only wanted to rock. With this record I've embraced my classical background and coupled that with the heavy guitar sounds that I love. Now I'm making music that sounds like me, past and present."

Despite Down Here's broader sonic palette, the album also retains its predecessor's edgy, hot-wired rock edge, highlighted by Bonham's dynamic vocals and untrained but inspired guitar work. "I'm not a good guitar player, but I've got a style that works for me," she observes. "There's a stupidity in my playing that makes it fresh, and I want to keep that ignorance."

Bonham's instinctive approach to her current axe makes for an interesting counterpoint with her early musical background. The youngest of nine half- and step-siblings, the Eugene, Oregon native first picked up the violin at age 9, at the suggestion of her music-teacher mother. She took to violin-and, later, piano-so naturally that as a teenager she studied music at the prestigious Interlochen Arts Camp (from which she was dismissed after three weeks for smoking a cigarette) and the University of Southern California. But the young prodigy soon found herself rebelling against the regimentation of classical music and drawn to the idea of making more aggressive sounds of her own.

Bonham's growing impulse to rock led her to Boston, where she studied voice and violin at the Berklee School of Music before dropping out to establish herself as a presence on the Beantown club scene, while recording commercial jingles to pay the rent. In 1994, she achieved a substantial local hit with "The One", a cut on the Curve of the Earth label's compilation

1 LP Girl (and later rerecorded for The Burdens of Being Upright).

2 1995 saw the release of the acclaimed seven-song EP The Liverpool Sessions,

helped her rise from local hopeful to the subject of a major-label bidding war.

4 Upon its release in the Spring of 1996, The Burdens of Being Upright quickly established Bonham as a significant new voice. The seething "Mother Mother" soon emerged as a much-misinterpreted generational anthem; Bonham admits that she initially avoided playing the song for her own mom, who ended up loving it and co-starring in the song's video. The album's success led to Bonham spending nearly a year on the road, including performances on two consecutive Lilith Fair tours.

Down Here's drawn out bir "That whole period lasted about a year, but it seemed like an eternity," says the artist, who spent some of her downtime composing classical piano pieces. "I felt like my whole life was on hold, like a part of me was missing. Some of the songs, like 'Freed,' are about that, like 'I just want to be free from all this crap,' which I think is a feeling that other people can relate to. I felt held down, while the rest of the world was going on around me, and that's why I called the album Down Here."

It's that sort of uncontrived forthrightness that gives Down Here much of its vibrant appeal. "I find that when I'm writing, if my reaction is 'Oh my God, I can't say that,' then I know I need to say it." Bonham observes. "It's difficult to resist the impulse to not offend people."

"I feel misunderstood at times," she continues. "But the lesson I learned from 'Mother, Mother' is that people interpret that song in different ways. It's cool that they develop their own relationship with the song. And in knowing that, my own experience becomes even more important to me. Now I'm ready to let go and not be so protective." 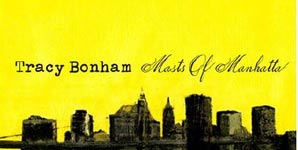