Tracy Morgan Rushed To Hospital After Collapsing At Sundance 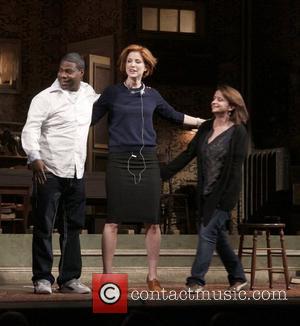 Comedian Tracy Morgan remains in a Utah hospital after collapsing at the Sundance Film Festival, according to ABC News. The 30 Rock star had been attending an awards ceremony when he was taken to the Park City Medical Center.
The comedian was reportedly being honored at the Creative Coalition Spotlight Awards, when he began feeling unwell after making his acceptance speech. Sources initially told Tmz.com that he "appeared extremely intoxicated", though a spokesman for the hospital has since released a statement saying no drugs or alcohol were found in Tracy's system upon medical evaluation. The spokeswoman confirmed his collapsing was due to a combination of exhaustion and altitude, adding, "He is with his fiance and grateful to the Park City Medical Center for their care. Any reports of Tracy consuming alcohol are 100% false". Morgan was escorted out of the building following his acceptance speech, where he fell unconscious and was rushed to hospital. The 43-year-old has a history of medical issues - he suffers from diabetes and underwent a kidney transplant two years ago.
The comedian was the focus of controversy in 2011 when during a stand-up show in Nashville he claimed he would stab his son if he turned out to be gay. He later returned to the scene of the show to apologize for his comments. Tracy's new movie 'Predisposed', with Jesse Eisenberg and Melissa Leo, is being screened at the Sundance Film Festival.