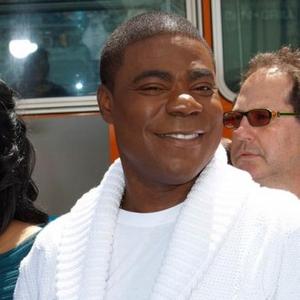 Tracy Morgan will return to work today (24.01.12) after recovering from his collapse at the Sundance Film Festival.

The 43-year-old actor was rushed to the Park City Medical Center in Park City, Utah after he passed out following an awards ceremony on Sunday (22.01.12) but Tracy - who claimed the altitude affected him - has insisted he is fine and will begin shooting new scenes for TV show '30 Rock' today.

He wrote on twitter yesterday (23.01.12): "Superman ran into a little kryptonite. The high altitude in Utah shook up this kid from Brooklyn.

"Thank U 2 the hospital staff. Back at work 2morrow shooting 30 Rock. Holla at me!

"Gotta thank the AMAZING medical staff and all my supporters! Love you. #GOgiants @Giants #ALLIN (sic)."

Ron Nyswaner - the co-director of Tracy's new movie 'Predisposed - blamed a combination of altitude sickness and complications with the actor's diabetes for the collapse.

He explained: "[It was] altitude sickness combined with his diabetes. And he hadn't eaten. He hadn't had enough water".

It had been reported that the recovering alcoholic seemed out of control at dinner, where he is said to have been shouting and falling over but a spokeswoman for the hospital said no DRUGS or alcohol were found in his system.