Ethan Hawke: 'I'd Rather Not Win An Oscar'

Actor Ethan Hawke Is Glad He Missed Out On An Oscar This Year (15) And He Now Aims To Beat The Record Of Late Actor Peter O'Toole, Who Was Nominated Eight Times And Never Won. 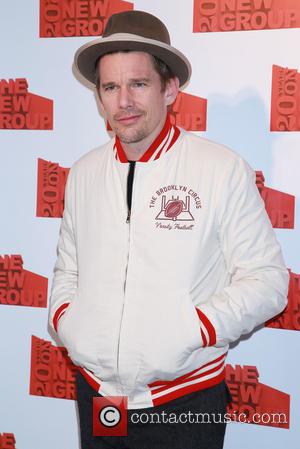 Picture: Ethan Hawke - A variety of stars were photographed as they arrived for The New Group 20th Anniversary Gala which was held at the Tribeca...

Hawke has been nominated for four Academy Awards, for his turn in Training Day and his screenwriting on Before Sunset and Before Midnight, as well as his acclaimed role in Boyhood, which pitched him in the Best Supporting Actor category at the 2015 ceremony.

He was beaten to the trophy by Whiplash star J.K. Simmons, and Hawke admits the loss has spurred him on to land more unsuccessful nominations, telling British newspaper the London Evening Standard, "(Awards are) just a distraction... So much mediocrity is strung up the flagpole. I'd rather not win. One of my acting ambitions is to beat Peter O'Toole who got eight nominations and never won."

O'Toole, who died in 2013, eventually accepted an honorary Academy Award in 2003 to recognise his career achievements.

Ethan Hawke: 'I'd Rather Not Win An Oscar'