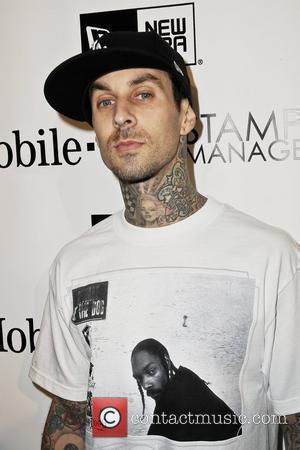 A judge has signed off on the settlement of a wrongful death lawsuit filed by the estate of Travis Barker's best friend, who perished in a 2008 jet crash, against the companies allegedly held responsible for the tragedy.
Barker and Adam 'DJ AM' Goldstein escaped the fiery wreckage of the plane, which crashed moments after attempting take off in South Carolina in September 2008 - but two of their friends and the two pilots were killed.
Chris Baker's wife Otilia filed suit against Clay Lacy Aviation, Goodyear Tire and Rubber Company and Learjet following the disaster but the various parties reached a deal to end the legal action last week (10Mar10).
The Learjet which crashed was reportedly overloaded and it skidded over the runway after a tyre burst.
The settlement, which awarded Baker's widow more than $7.6 million (£4.75 million), was approved by Los Angeles County Superior Court Judge Mary Strobel on Tuesday (16Mar10).
Under the terms of the deal, Baker's three-year-old son Sebastian's college education would also be taken care of and a fund worth more than $17 million (£10.63 million) over his lifetime would be established.
After the hearing, Otilia Baker's attorney Brian Parish said, "It's a very sad case, but we're glad they were able to avoid a trial and receive full compensation."