Troian Bellisario married her partner - 'Suits' star Patrick J. Adams - over the weekend in a star-studded ceremony in California that saw them camping in tents against a glorious setting and arriving in a boho-style converted school bus that suited them down to a tee. The 31-year-old 'Pretty Little Liars' star was finally wed in a Cortana gown after almost three years of engagement on Saturday (December 10th 2016) at a sensational ceremony in Santa Barbara. Among the 200 guests were her beloved co-stars Sasha Pieterse, Ian Harding, Ashley Benson, Lucy Hale and Tyler Blackburn. Shay Mitchell regretted that she was not able to attend.

Troian is the first of the main PPL team to become wed, but Sasha Pieterse - who plays Alison DiLaurentis - is engaged to her boyfriend Hudson Sheaffer. Troian and Patrick started dating in 2009 after they met during their appearance in the play 'Equivocation' and had a romantic engagement under the Eiffel Tower in Paris in 2014.

They weren't together long before they broke-up for a short period, but they ended up back together when Patrick starred in an episode of 'Pretty Little Liars' - 'Reality Bites Me' - as Ezra Fitz's college friend Hardy. Troian starred alongside Patrick one again in 'Suits' in 2015, as well as two short films called 'The Come Up' and 'We Are Here ' released in 2012 and 2016 respectively.

I can truly say that I have never had a more beautiful or happier three days in my life, but what's more incredible than that was that right in the middle of it I married my best friend. @halfadams I love you. Always and in all ways. #fortday2016 (photo by the incredible @maxwanger thank you max)

'I can truly say that I have never had a more beautiful or happier three days in my life, but what's more incredible than that was that right in the middle of it I married my best friend', she wrote on Instagram, alongside a backview photo of the pair of them staring into the sunset.

Patrick and Troian did not opt for the traditional gift list for their wedding, instead asking their guests for donations to the David Suzuki Foundation and SickKids Hospital. 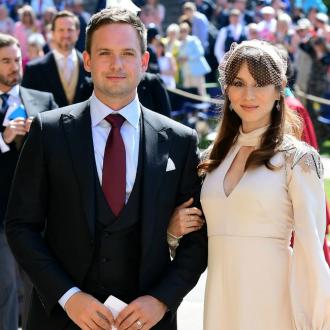