Review of Achtung Baby: 20th Anniversary Edition Album by U2

I've had a largely difficult relationship with U2's creative pinnacle, Achtung Baby. Back in 1991 we were allowed to bring in music to listen to on the last day of term. Inevitably the album of choice for my peers was Nevermind, mine was Bono & co's album that defined U2 for a new decade. Cue ridicule for not following the crowd, the reaction of a room of 11 year olds wasn't helped when the teacher insisted on not putting Nirvana back on because he 'quite liked U2 too'. It turned me off the album for a long time, but maybe that experience encapsulates why Achtung Baby is such a great record. 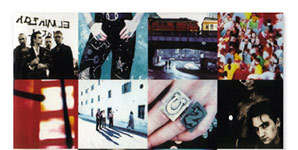 It's a much broader album than the widescreen soundscapes of 80's U2. There's dance music and electronica creeping into the spaces between monster riffs and the tinny industrial sounding percussion. It's also a much more claustrophobic and personal record, cloaked in darkness and bathed in neon lights. The gritty and mysterious material meant that upon its release Achtung Baby understandably appealed to a teenage market, as much as middle-aged and more critical listeners. 20 years later I'm pleased to report that the 12 songs are just as exhilarating as they were the first time round.

With little remastering necessary Daniel Lanois and Brian Eno's production stands up to renewed inspection two decades later. The distorted opening strains of 'Zoo Station' still sound good before they give way to the Edge's recognisable guitar that spins around the speakers. But unlike some of U2's earlier albums the key here is Clayton and Mullen Jr's rhythm section which sounds like an industrial production line. Meanwhile Bono's taking the opportunity to deconstruct his overly serious persona, 'I'm ready for the laughing gas'. Thematically Zoo Station also sets up what's to come with references to the seedier side of city life, while also introducing the recurring ideas of darkness and night. 'In the cool of the night - in the warmth of the breeze I've been crawling around on my hands and knees', is echoed elsewhere on the album numerous times with the opening lines of 'The Fly' being the most obvious example, 'It's no secret that the stars are falling from the sky. It's no secret that our world is in darkness tonight'.

The references to sex, drugs and crumbling relationships were no doubt, fuelled by the initial sessions taking place at Berlin's Hansa studios (with the Berlin Wall falling while the band was in the city). The initial euphoria of the reunification of East and West was overshadowed by uncertainty and urban decay, and Achtung Baby perfectly captures that mood. For every moment, such as the soaring chorus of 'Even Better Than The Real Thing', there's also a darker more sinister counterpoint like 'Until The End Of The World' ('I took the money - I spiked your drink. You miss too much these days if you stop to think'.). Despite this, album number seven from U2's extensive back catalogue doesn't feel rooted by its historical ties.

Achtung Baby may not have been the soundtrack for a generation in the same way as Nevermind, but it's a complex record that reinvented U2. The numerous anniversary editions of the album all shed light on the material with B-sides and remixes in the 2 cd deluxe package demonstrating just how far towards dance music some of the material had strayed (the Perfecto Mix of 'Even Better Than The Real Thing' remains a true crossover track). If you're feeling super flush you can even look like Bono too, with his 'Fly' sunglasses being one of the extras in the Uber deluxe set. However the care and attention that's been put into this re-release is just garnish for what's an exceptional album anyway. While for me, Achtung Baby will always bring back memories of angry 11-year-old Nirvana fans; it's a tour-de force that deserves to be revisited.