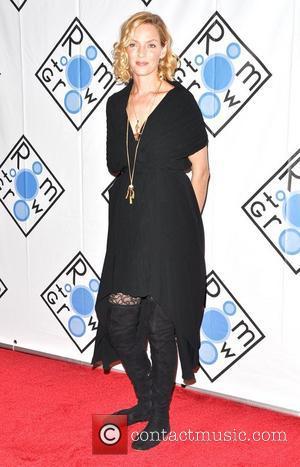 Uma Thurman's stalker JACK JORDAN is seeking a plea deal after being accused of trying to contact the actress again.
UMA THURMAN's stalker is attempting to negotiate a plea deal after it was discovered that he attempted to contact the Hollywood actress again, despite being on probation, reports the Associated Press.Jordan was convicted of stalking and harassing UMA THURMAN in 2008 and has told by a judge he was forbidden to contact the star. However, he was arrested at his parent's home in November 2010 after phoning Thurman's phone lines and demanding to speak with the actress. When police raided his home, they found the words 'Uma Thurman J'adore' or 'I love Uma Thurman' typed into a Google search bar on his computer. Jordan has been behind bars since December 2010 and is due back in court on March 30th 2011. If the new case goes to trial Jordan could face up to four years in prison for breaking the terms of his probation. It is understood that defence lawyers may attempt to seek a psychiatric treatment program as part of a possible plea deal. Lawyer Sam Roberts said, "Any disposition ... would not include felony charges, certainly he didn't commit a felony".
It was reported earlier this week that UMA THURMAN has joined the cast of the forthcoming romantic comedy 'Playing the Field'. The movie, set to be directed by Gabriele Muccino, also stars Jessica Biel and GERARD BUTLER.