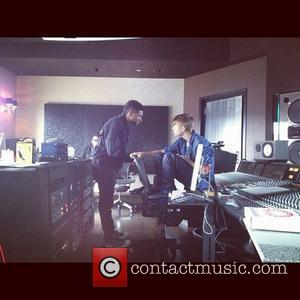 Picture: This image of Usher and Justin Bieber in a recording studio, was posted on Instagram

Usher returned for his third stint on Saturday Night Live this weekend, debuting two new tracks from his forthcoming album 'Looking 4 Myself'. The R&B star began with the high tempo single 'Scream', though later schmoozed the audience with the slower 'Climax', reports Rolling Stone magazine.
In addition to his performances, Usher made a brief cameo in the star-studded 'Digital Short' as well as appearing as Mr Galactic Fantastic in the '2012 Funkytown Debate' sketch, lending his support to Will Ferrell's mayoral candidate Captain Catfish. The singer's last studio album 'Raymond vs Raymond' came out in 2010, with guest vocalists including Redone, Tricky Stewart and Jermaine Dupri. The album received mixed reviews from critics, though won Usher numerous awards including the Grammy for Best Contemporary R&B Album and Best Male R&B Vocal Performance. 'Looking 4 Myself' - which hits shelves on June 12, 2012 - includes collaborations with Empire of the Sun and Swedish House Mafia. Producers on the record include Diplo, Rico Love, Jim Jonsin and Max Martin.
This week's Saturday Night Live was hosted by Will Ferrell, who resurrected some of his favourite routines from over the years, including his famous George W Bush impression.