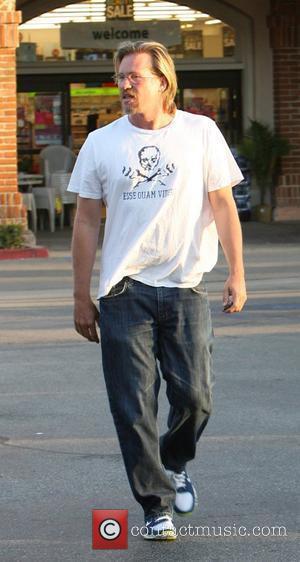 Val Kilmer couldn't wait to die in The Doors - because he was tired of playing rock legend Jim Morrison.
The movie star admits reliving The Doors singer's life took a huge toll on him, and he relished the bathtub death scene in the Oliver Stone biopic because he knew it would be the last thing he'd have to do as the tragic rocker.
He tells WENN, "I was relieved to die in The Doors, just so I didn't have to do anything else.
"Jim Morrison was such a great character but such a tragic guy. He wasn't that much fun. He was goofing around a lot but that's coming out of a lot of turmoil with his behaviour that was so extreme.
"Plus Jim Morrison just jumped off the stage once a night. I had to do it 15 times in a row.
"It (the role) took it's toll physically, so I remember being in that bathtub for the death scene thinking, `Ah, this is great! I hope I don't breathe and blow the shot because I was very happy to die."