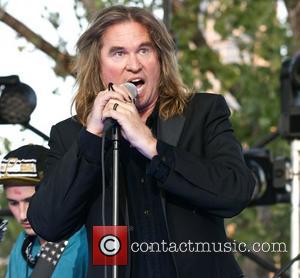 Val Kilmer, Michael Fassbender and Rooney Mara became rock stars for the night at the Fun Fun Fun Music Festival in Austin, Texas on Saturday night (03Nov12) when they joined The Black Lips onstage for a punk number.

Kilmer, who plays a faded rocker in Terrence Malick's untitled new film, hit the stage in character, thrashing about, screaming at the crowd and smashing a guitar. He also hacked off his hair with a penknife.

He was joined by co-stars Fassbender and Mara, who shared a kiss at the side of the stage.