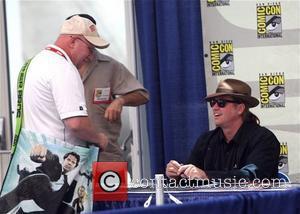 Val Kilmer is getting back in the saddle to play an ageing Wyatt Earp in director Mike Feifer's new movie THE FIRST RIDE OF Wyatt Earp.
Kilmer played the cowboy legend's sidekick Doc Holliday in 1993's Tombstone and now he's playing the Wild West hero looking back on his life in the new film.
Former American Idol favourite Diana DeGarmo will play the young Earp's love interest, while newcomer Wilson Bethel will play Doc Holliday, according to Variety.