By Stephen Caswell in Music Reviews on 25 June 2015

"Hello, I'm Taylor, and I love seeing a sold out Manchester Arena", called Taylor Swift as if the fifteen thousand people screeching from the stands didn't know who she was. For someone with seven Grammy Awards, Swift immediately came across as an incredibly humble performer. This could be one of the best things about her performance at Manchester Arena on Wednesday night - her vigorous determination and beaming smile showed that she wanted to be on stage as much as her fans did. 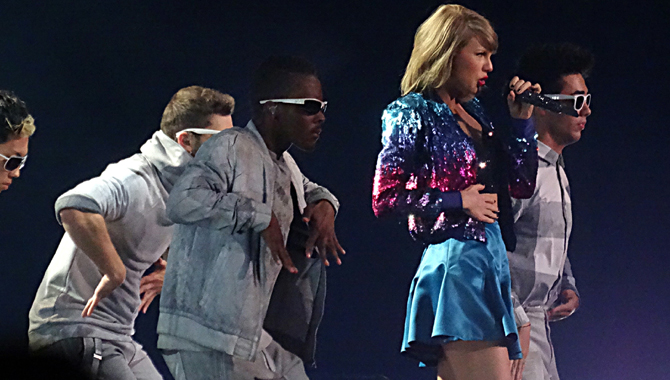 Attracting fans of all ages from across the world, Swift was met with a tremendous applause and insanely strong reaction from the crowd as she launched straight into 'Welcome to New York'. It set the scene well; we were all there for an evening with Swift in the magical musical world she had created. "There's something else you should know about me", she said after her first song. "I was born in 1989!"

Stories about heartbreak, believing in yourself and (surprise, surprise) heartbreak again were honest, and moving. Her joyous and bubbly personality was heightened by moments where she played the wrong note on the piano (and informed everyone) and laughed when one of her backing dancers made a funny face at her from behind a clear screen. These minor moments humanised her performance, reminding the audience that the superstar on stage was a real person, not just a manufactured pop robot.