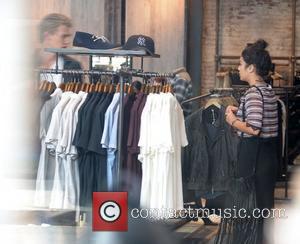 Picture: Vanessa Hudgens and Austin Butler seen out at All Saints Boutique after having lunch in Hollywood Los Angeles, California - 16.08.12

Vanessa Hudgens - best known for her role as an innocent teenager in High School Musical - appears to be tackling more, well, mature roles. Hudgens, 23, plays a pole dancing stripper in new thriller 'The Frozen Ground', also starring Nicolas Cage.
In new stills from the movie - obtained by the UK's Sun newspaper - Hudgens gyrates against in pole before crawling on her hands and knees. The film - also starring 50 Cent as a pimp -is based on the true story of serial killer Robert Hansen who kidnaped and murdered between 17 and 21 women before letting them loose into the Alaskan wilderness and then hunted them down. John Cusack takes on the sinister role of Hansen, while Vanessa plays stripper Cindy Paulson who manages to escape from the killer's clutches. She subsequently provided vital clues as to the identity of the killer, helping Cage's detective character to track him down.
It's certainly Hudgens most adult role yet, though it could be eclipsed by her turn in Robert Rodriguez' forthcoming action 'MAChete Kills'. She joins Charlie Sheen, Amber Heard and Mel Gibson in the sequel to the 2010 exploitation B-movie 'MAChete'. Hudgens will also star in the forthcoming drama 'Gimmie Shelter', about a teenager who sets out to find her Wall Street father.