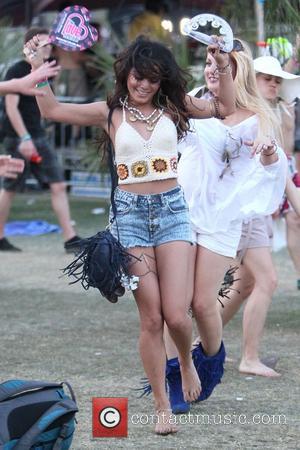 Vanessa Hudgens - The 22-year-old American actress Vanessa Hudgens was photographed licking a "mysterious white substance" off her finger at the Coachella Music Festival, reports OnTheRedCarpet.com. Hudgens was attending the festival in Indio, California, with the actor Josh Hutcherson.
Vanessa and her reported boyfriend, who recently starred in 'The Kids Are Alright', soaked up the blistering sunshine and enjoyed some of the festival's 170 musical acts, including The Strokes, Arcade Fire, Lauryn Hill, Bright Eyes and PJ Harvey. Hudgens and Hutcherson, who appear together in the forthcoming adventure movie 'Journey 2', were spotted drinking in the Vip tent at the 3-day festival and were photographed numerous times throughout the weekend. The image in question which appears on Gawker.com and shows Hudgens licking a white powder from her fingertip, has caused a stir across Twitter and other social networking sites but the actress has yet to comment on the matter.
Vanessa Hudgens was joined by a number of A-listers at this year's festival, including Kate Bosworth, Lindsay Lohan, Usher, Katy Perry, Kate Hudson, Dita Von Teese and Paris Hilton. Kanye West closed the festival on Sunday evening (17th April 2011).