Following in the footsteps of the likes of Belle & Sebastian, The Cinematic Orchestra and Four Tet, Metronomy take the curatorial baton for this Late Night Tales compilation/DJ set. Through the tracklist of their self-curated Late Night Tales release, Metronomy show multiple sides to their personality through quite a diverse selection of tunes. 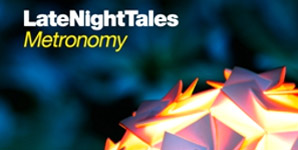 Outkast's 'Prototype' opens the compilation with spacey echoing guitar then heavily reverbed vocals before bass and beat kick into a smooth chilled vibe. It's a steady pace and gentle groove to open which segues seamlessly into Tweet's 'Drunk' which continues with a similar steady pace and almost trip hop like spacey feel. This is followed by a strange and slightly uncomfortable segue into SA-RA Creative Partners' track 'Cosmic Ball' which opens with a 'cosmic' sounding speech excerpt. The track continues as sax led jazz with busy drums and spacey synths underpinned and anchored by a barely audible walking bass line.

Chick Corea's 'El Bozo (Part 1)' then opens with an unaccompanied abrasive solo synth sound which sounds sombre tones before an interjection of eighties synth craziness a la Herbie Hancock. The mix then segues from the strange synth notes of El Bozo into the string riff of 'Blue Flowers' by Dr Octagon, a rap track which changes the gear of the compilation once again though its violin riff seems to continue this cosmic, spacey kind of theme beneath rhythmic scratching. There's a brief snap back to the eighties vibe with a synth heavy blend beneath speech during Lonzo & The World Class Wreckin Cru's 'Cache Vocal', before Metronomy include their own exclusive cover of the Jean Michel Jarre track Hypnose. During the cover version, Metronomy continue the spacey electronic vibe of the compilation with their trademark layered synth style, though it's good to hear the band delve into deeper moving film music away from their experimental electro pop; the cover version has a real intensity and atmosphere that much of their own original work lacks.

The Alessi Brothers' 'Seabird' changes the feel again from the intensity of the Jean Michel Jarre cover in a quite chirpy song that sounds somewhere between Hot Chip and Belle & Sebastian in its blend of indie folk and electronic whilst Autechre's 'Fold 4, Wrap 5' returns to the pops, squeaks and squelches of synthesiser heavy instrumental electronic. Metronomy change the gear once again though with 'Weather The Windmill' by Mick Karn, another instrumental led by a repeated Pistorious-esque bass melody accompanied by atmospheric whirring and sweeping synth parts and subtle percussion whispers. Much like the track which preceded it, 'Weather The Windmill' is based on the repetition of a central theme and the varied accompanying blends around it.

Slightly later, as its title suggests, 'Cybernaut' continues the outer space theme of Metronomy's selection in yet another synth-focused electronic instrumental that harks flavours of Kraftwerk, followed by a dreamy surf pop track by Pete Drake. With 'Compliante Pour Ste Catherine', Kate And Anna McGarrigle offer a completely different sound with a kind of French folk reggae type groove prior to Herman D_re's 'Winners Lose'; a down tempo melancholy bluesy ballad. The D_re track segues into the gentle bluesy guitar and rich cello opening of Cat Power's 'Werewolf', a sultry and melancholy yet beautiful down tempo number, an almost complete contrast to the remainder of the compilation/set, and an enticing conclusion to the fine and diverse musical offerings of Metronomy's Late Night Tales disc; another fine compilation.