Review of Rave On Buddy Holly Album by Various Artists

Rather than a clever name for a new band or album (which would work quite well, I think), this is in fact a tribute album. In celebration of his 75th Birthday, someone has put out this in memory of the great man himself. Step forward a diverse group of musicians with little in common apart from popularity, in order to show how far Buddy Holly's particular brand of rock and roll has permeated modern day music. 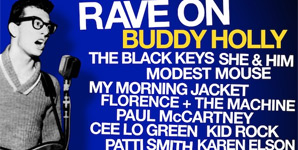 Most bona fide musos won't need a compilation such as Rave On... to illustrate this point. Buddy Holly has long been an obvious presence in the early careers of say, Paul McCartney (featured here) and Elvis Costello (notably absent). The latter even went as far as to borrow his outfit head to toe on the cover of his debut album My Aim is True.

Holly was not the crudest source of rock n roll, but rather the one of the crowd responsible for bringing it to white middle class America. He hadn't the fiery sexual overtones of Chuck Berry or Little Richard but his songs were clever, fun and polished: the origins of modern pop music as we know it. The nod and wink of 'That'll be the Day,'

With contributors ranging from Florence and the Machine to Lou Reed, what we have here is an extremely uneven compilation, from the sublime to the ridiculous. All in all it feels contrived, pastiche and a little soulless. Some people are obviously having fun, some people give rather straight down the line, uninspiring versions. The real problem is that a compilation like this would only really knock the bobby socks off an audience if it had some balls to experiment really far. She and Him, who I'm usually quite fond of, do nothing for 'Oh Boy!', Cee Lo Green gives '(You're So Square) Baby I Don't Care' a perfunctory feel up but he sounds like he's desperate to get out the door. Justin Townes Earle (son of Steve) treats 'Maybe Baby' much better, spreading on some soul with his wonderful voice. Florence and the Machine keeps her usual caterwauling to a minimum but Kid Rock's Luther Vandross impression on 'Well Alright' is enough to curl anyone's toes.

I return to my main point: This is neither new nor particularly innovative. We have countless radio 1 live lounge albums for such quirky reinterpretations of classics. I can't lie, after one rotation of Rave On... it was switched off and replaced by a Buddy Holly anthology. Which is all I can hope of other listeners.