Review of The Great Gatsby OST Album by Various Artists 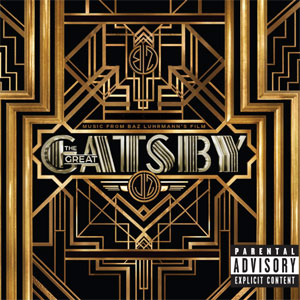 There are many highlights throughout the 14 tracks including the atmospheric lead single 'Young And Beautiful' by Lana Del Ray. The seductive and sultry delivery carries the heir of menace and uncertainty which nags at Gatsby's character during the film. Jack White steps into the fold to give a stirring, definitive and impassioned rendition of U2's 'Love Is Blindness' and even The XX get to provide some of their unique minimalist restraint on the sad and brooding 'Together'.

Jay Z, with the superbly arranged '$100 Bill', and wife Beyonce, with a cover of the Amy Winehouse staple 'Back To Black' (ft. Andre 3000), kick off the soundtrack in a fittingly flamboyant style but it is elsewhere that the true joy and unadulterated enjoyment of this album can be found; where a fusion has been forged between the sound of 2013 and the spirit and mood of the 1920s is pure genius. Will.i.am's light-hearted, whimsical, Charleston infused party piece 'Bang Bang' is a rip-roaring success and fellow Black Eyed Pea Fergie's rendition of 'A Little Party Never Killed Nobody' is a revelation. The reverse beats and horn enhancements that help drive the pulsating pace are a treat.

Perhaps the biggest contribution, however, other than Jay Z and Luhrmann, comes from a more unlikely source. Bryan Ferry and his orchestra have helped provide the OST with two of the album's unquestionable highlights. Whilst his orchestra help deliver a fabulous re-arrangement of 'Crazy In Love' with Emeli Sande on vocal duty, it is the re-working of Roxy Music's 'Love Is The Drug' that really captures all that this soundtrack and film are about. The production and arrangement are flawless. To take such a well-known song, twist it brilliantly to fit its location and make it sound indistinguishable (yet still fantastic) from the original is masterful. This is The Cotton Club, speakeasy's, prohibition, roaring 20s, dreams and decadence in one magnificent 2min40sec burst.

The Great Gatsby soundtrack is a well worked, well thought through musical expression that both compliments and combines beautifully with its celluloid partner. Baz Luhrmann achieved a similar result with his seminal work on 1996s Romeo & Juliet, but I think with his attention to detail here he has surely surpassed that, in terms of the soundtrack at any rate. Enjoy it for what it is; a fabulous set of tunes that stand alone on their own merit.